It's easy to point fingers when things are going badly, especially for a professional NFL team like the Carolina Panthers.  It wasn't too long ago, when the Panthers were winless at 0-2 and then hopeless at 1-3, that people were pointing fingers in all directions.  Some were pointing to offensive coordinator Mike Shula, saying he was even more conservative than former OC Rob Chudzinkski ; others pointed at Head Coach Ron Rivera for not trusting his players enough to go-for-broke on several 4th-and-1 plays and for allowing the Panthers opponents to come back and win close games in the closing minutes of the fourth quarter.  And many wondered if former rookie phenom QB Cam Newton, now in his third year, could really mature and become the leader that the Panthers will need to guide them back into the playoffs, or would he instead somehow morph into a newer version of former Panthers QB Jake Delhomme, whose last infamous dip into the doldrums was a 2008 home playoff loss to the Arizona Cardinals, in which he personally committed six (count 'em) turnovers.  Lately, it has been a roller coaster ride, in which the Panthers (and Cam) play a great game, then look as if they did not show up at all for the next one.  Less than a month ago, Newton threw three (3) interceptions and no touchdowns in a 22-6 loss to the Cardinals.  Seemed like deja vu all over again. (!)

Remember owner Jerry Richardson's goal/prediction in their inaugural 1995 season-- to win the Super Bowl within ten years?  Actually, they made it TO the Super Bowl in 2003 (with two years to spare) in their eighth season, only to let Richardson's dream fade in the closing minutes by the margin of a single field goal.

Remember center Ryan Kalil's ill-fated prognostication a year ago?   A full-page preseason ad in the Charlotte Observer predicting a Panthers -- not winning record, not playoff appearance, but -- Super Bowl victory in 2012.  What he also failed to predict was his subsequent season-ending injury that allowed him to watch from the sidelines as the Panthers fell short, of not just the Super Bowl, but the playoffs, finished 7-9.  And Panthers QB Newton was quoted after a loss as saying, "There's no finger pointing in this game, especially not on this team. So if you expect me to point somebody out, or do this, if anything you can point the finger at me."

But that was THEN, this is NOW, right ?  Well... maybe.  It's a quick jump on-and-off the Panthers bandwagon.  There have been many ups-and-downs over the period of the Panthers' 18-year history. 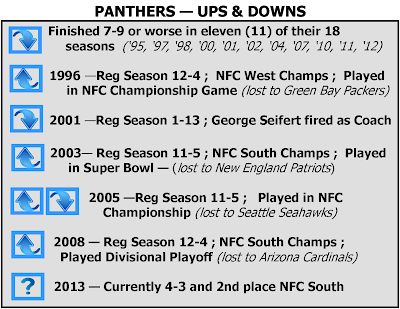 Many have also been quick to point out that the recent succession of wins by the Panthers have been against teams with combined records of 5-22, the latest against the winless 0-7 Tampa Bay Bucs.  But-- in their defense -- the Panthers did not make their own schedule or select their own opponents, and it is also true that they have typically been a hotter team in November/December.  Remember- they won four (4) straight at the end of the 2012 season.

Cam Newton has been quick to give all of his teammates the nod for their recent success (winning three games in a row and 4 out of 5).  And rightfully so.  Even though Newton has shined in moments -- over the last three games (all wins), he has totaled
almost 700 yards passing, with six (6) touchdowns and no (0) interceptions, his teammates have been carrying their own weight.  The Panthers have averaged almost 100 yards rushing.  Their defense ranks second (2nd- behind 7-0 Kansas City) in LEAST POINTS ALLOWED, and third (3rd) in LEAST YARDS ALLOWED.

The KEY, however, to the Panthers' hopes for a playoff berth this year, in all likelihood, will rise or fall on two sets of games : two this month, and two in December.

The key November games will be :
Then two (2) division games in December against their rival New Orleans Saints.

Of course, Carolina also has to play their other five (5) games : three of them are division games against the Atlanta Falcons (twice) and the Tampa Bay Bucs (at home); they also face the New York Jets and the Miami Dolphins.   But if they fare well in the other four (4) games, their momentum should carry them through against these weaker teams.

My prediction :  I believe if the Panthers can go 2-2 or 3-1 in these four crucial games, they have a good or better chance to win their division and/or make the playoffs.  If they go 1-3, then it's doubtful.. and 0-4.. well- then you may want to invest in some Charlotte Bobcats tickets.

Hey, what with all of this finger-pointing going on, maybe Cam Newton will be able to capture this pose sometime in the near future.  As Panthers fans, let's all hope so.