Buffalo-- No.. but Giants are Compliant..

I missed a blog on the Buffalo game.. or maybe I was just in mourning.. after that toss in the end zone with two seconds left, it was terribly difficult to don my Panthers cap or shirt again for a few days.

It also seems quite an odd but common occurrence, but the Panthers seem to lose to teams they should beat easily, and then surprise us with a convincing win over a better team. Quite a flip-flop. This year, though, I'm not sure you could call the 0-3 Giants a better team.  Neither could their coach at this point.  On Sunday, the Panthers literally whipped the Giants, 38-0.  It was the worst defeat the Giants had experienced under head coach Tom Coughlin, and even more amazing, the most lopsided game that the Panthers had ever won.

I'm glad we won on Sunday.. never sad that we win.. but I'm wondering what version of the Panthers will emerge from their "Bye" week.  The next game is October 6 at Arizona.  The Cardinals are also struggling, but I'm expecting them to give us a good game.

As for the game this past Sunday, the biggest surprise was how well the ragamuffin secondary proved to be.  For those of you that didn't know, the Panthers evidently lost three of their four starting defensive backs in the past week.  The starting defensive backfield was made up of only one previous starter, plus three others who were either just signed or brought up from the practice squad..  at least two of the three were starting their first NFL game. Yet they made two interceptions and kept the talented Giants receiving corps in check all day long. 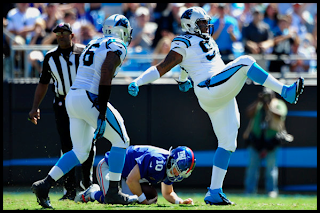 I am sure that the secondary was patting the backs of the Panthers front four, who registered a franchise-tying record of seven sacks of Eli Manning.  Plus the offense came into its own in this game.   QB Cam Newton threw three TD's (two to previously quiet WR Brandon LaFell), and also ran for another.

In retrospect, this is far from the result that I had expected for the first three games of the season- it's not so much the W-L record, but how it happened.  The first two games seemed like deja vu all over again from last year.  The Panthers have historically come out slow, and either fallen way behind their opponent, or somehow gained a very slim lead, which they would keep until sometime in the fourth quarter, when they managed to fall completely apart and usually lose in the closing minutes.

Yes- the Panthers led the league last year in games lost by less than a touchdown, and lo and behold, the first two losses this year- are by a combined total of six points!  That's right- the equivalent of just one touchdown- and the Panthers would be 3-0 and leading their division.  And yes- I had hoped for 3-0, but even 2-1 would have been okay.

I am certainly glad for a win (finally!), but after the "Bye" week, Carolina must be focused and determined.. and mean.  They must have the killer mentality, the eye of the tiger, whatever you wish to call it.  The next four games are extremely important, for in November, we will be facing the Falcons, 49'ers, Patriots and Dolphins, whose cumulative record is 8-4.  Actually, the Patriots and Dolphins are undefeated at 6-0, and although the Dolphins might be just a bit over-rated, we all know that the Falcons and 49'ers are better than their 1-2 records indicate at the moment.  We will certainly have our hands full.  And if we blow a couple of the October games, we might be looking at a 3-8 or 4-7 record by the end of November.

So-- if the Panthers are really SERIOUS about meeting the Seahawks again (or ANY team) in the playoffs, they better be just as serious when they come back from their mini-vacation in October.

Posted by GuiTarHeel at 9:12 AM No comments:

This past Sunday was a "Delightful Disaster"... a wonderfully enjoyable time.. somewhat disappointed by a play gone bad at the end of a hard-fought game.

I got a phone call on Friday from a good friend of mine.. Fred's boss, who is a Panthers PSL owner, offered him two tickets to the home opener with the Seattle Seahawks.  He in turn offered me one of the tickets and the opportunity to enjoy an NFL football game with my favorite team. After deliberating for at least a second, I accepted the invitation.

Sunday was a marvelous, bright sunny day, temperature in the high 80's, with a beautiful blue sky.  After hanging out for awhile, we headed out to the stadium and arrived about an hour-and-a-half before kickoff.  We walked around a few minutes, observing all of the tailgaters, and taking a few pictures. There was a huge crowd everywhere we went, with people tossing footballs and cooking out and just having a great time.

We got to the stadium and after being greeted at the front gate by our metal detecting team, we found our seats about a half hour before the start of the game.  It was warm, but we had our hats, caps and towels, plus four bottles of water.  A few minutes after we arrived, we met a really nice couple from Raleigh, named Trent and Tammy.  We chatted and enjoyed their company the entire game. 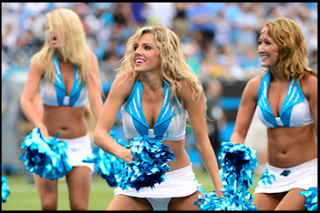 We watched while the new drum team came out and played, and then the cheerleaders took the field and showed off some of their moves.  Then, the anticipation reached a climax as everyone's eyes were focused on the tunnel and the huge Panthers logo at the corner of the stadium.  The players rushed out onto the field amidst a gigantic roar of the crowd.  It was time!  The season was about to officially start!

The Panthers got off to a pretty good start.  They made some good plays, but never quite got close enough to threaten a score.  Then in the second quarter, after a Seattle drive and field goal, Carolina marched 80 yards down the field and scored a touchdown on a short pass from Cam Newton to Steve Smith.  Unfortunately, though they came close a couple more times, that proved to be the only score of the day for the Panthers.

What seemed like a great start and the promise of a new path eventually turned into a much too similar conclusion, as the Panthers maintained a very slim lead of 7-6 for most of the second half, only to see the Seahawks get a big break on a 43-yard bomb for a touchdown from QB Russ Wilson, who threw for over 300 yards, to WR Kearse with about ten minutes left.

Same old story.  Panthers fight for a slim lead, hold on for dear life, never building a cushion, and then somehow manage to lose at the end of the game. 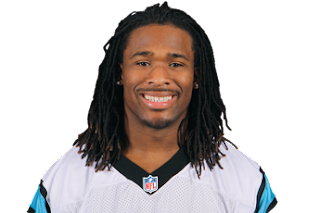 This time, old reliable running back DeAngelo Williams took off on a 2nd-and-2 play for a 16-yard jaunt, only to be stripped of the ball at the Seattle 8-yard line.  As "D" broke free, it seemed like an obvious 1st-and-goal for the Panthers, and an almost sure game-winning touchdown.  But alas- it was not to be.  It seemed like an eternity as the ball just sat motionless on the turf, while a pile of players suddenly turned and lunged for its possession. DeAngelo was one of those players fighting for his own fumble, but could not get to it in time.  Seattle took possession, ran out the clock, and foiled our season opener.

[The above picture of DeAngelo Williams was NOT taken after the Seattle game.]

After the game, DeAngelo took sole responsibility for losing the game, while most of his teammates consoled him and insisted it was a team loss, not just one individual's responsibility.  Either way, the box score remained the same.

Playoff-bound?  Before the game, I would've probably bet on it.  Now? Still a devoted Panther fan, I'm hoping they will bounce back and put together a string of wins to a playoff berth.. even if they have to sneak it the back door.

The Good News?  Next up-- Buffalo.

[Note: If you are one of the FANS that was photographed at the game, your pics will be up here soon.. had a problem in downloading.. check back!]

Posted by GuiTarHeel at 8:58 AM No comments: