A Book All Panthers Fans Should Get 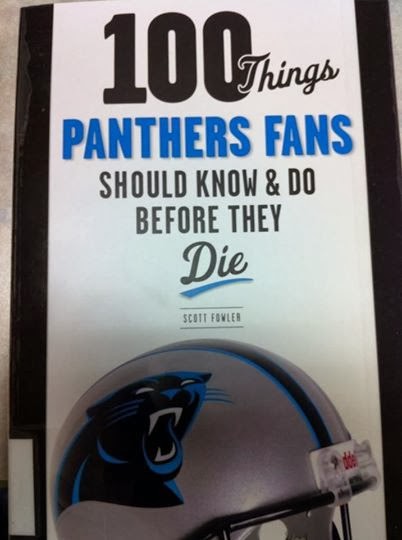 I'm presently reading the new book by Charlotte Observer sports reporter Scott Fowler, titled "100 Things Panthers Fans Should Know & Do Before They Die".   What a Title !

I can hardly wait to get into this book and see just what goodies are in store for me.. and all other Panthers fans.

If you haven't got your copy yet, you can order you a copy through Amazon.com or other book retailers, or contact the author himself at www.charlotte.com.
Posted by GuiTarHeel at 9:31 AM No comments:

We were on a mission.  An eight-game winning streak.  11 wins in 12 games.  The only glitch along the way was a loss in , and that was redeemed with a home win two weeks later.  Then another division championship.  A home playoff game.  Hints of past glory... three NFC title games… a trip to the Super Bowl.  And then.. there was nothing.

There was nothing to show for our effort.  Sure- we could say it was a good season, even a great season, by anyone’s standards. Our regular season record was an impressive 12-4.   Our best record since 2008.  But our season ended with a sour taste, a similar one to five years ago, when we also had a 12-4 season, a division championship, and a home playoff game.   But then.. there was nothing.

We lost then, to the Arizona Cardinals.  And again this year, to the 49ers.  Neither team that beat us would go on to win the Super Bowl.  Which basically means that both of these losses were in vain.  Fans would go on and on about scenarios in which we would’ve won Super Bowls in both seasons, had we just been able to get by this one playoff game.

And so, there’s a bit of a void here tonight, as I watch the Big Game, Super Bowl XLVIII, between the Seattle Seahawks and the Denver Broncos.  I’ve been hesitant to even pick a winner, because in reality, I just don’t care.  I still feel like our team should’ve been there. If it were not for a lackluster second half against the 49ers, we would’ve made it.. and won.


But then.. there is nothing.

Posted by GuiTarHeel at 3:15 PM No comments: