Ask and You Shall Receive

The Panthers front office may end up praying this prayer before the beginning of the next NFL season.  What started as an unresolvable personnel issue with 15-year veteran star receiver Steve Smith has mushroomed into a much bigger and seemingly unsolvable problem.  As Smith's release and subsequent rapid signing by the Baltimore Ravens was being announced, an equally rapid series of exits took place, the Panthers suddenly losing Domenik Hixon to the Chicago Bears, Ted Ginn Jr. to Arizona, and Brandon LaFell to the New England Patriots.

What began a few weeks ago as a bad situation has soured into a bottomless pit for Carolina's receiving corps.

We Carolina fans got a whole lot more than we bargained for in this past season.  Toward the end, we were a little disappointed, but for the most part, it was a year with more highlights than drawbacks.  We saw a team that went on a roll, winning eleven games in a row, winning the NFC South division championship, and going to the playoffs for the first time in five years.  Once again- we were denied a chance at the Super Bowl, but overall, we had a lot to make us glad and happy.

After several years of struggle, LaFell had come into his own, gelling as the Panthers' legitimate partner to Smith at wideout.  Ginn had been touted as one of, if not the, fastest player in the league.  And Hixon, although he only caught seven passes in 2013, might be nominated for MVP, as one of those seven catches was a circus touchdown catch in the end zone with seconds left to win against the Saints to virtually wrap up Carolina's NFC South division championship.

But now, all that seems a distant memory of the past, as once again, we are left with only faint hopes of a revisit of last year's success.   Once again, our beloved Panthers are in rebuilding mode... 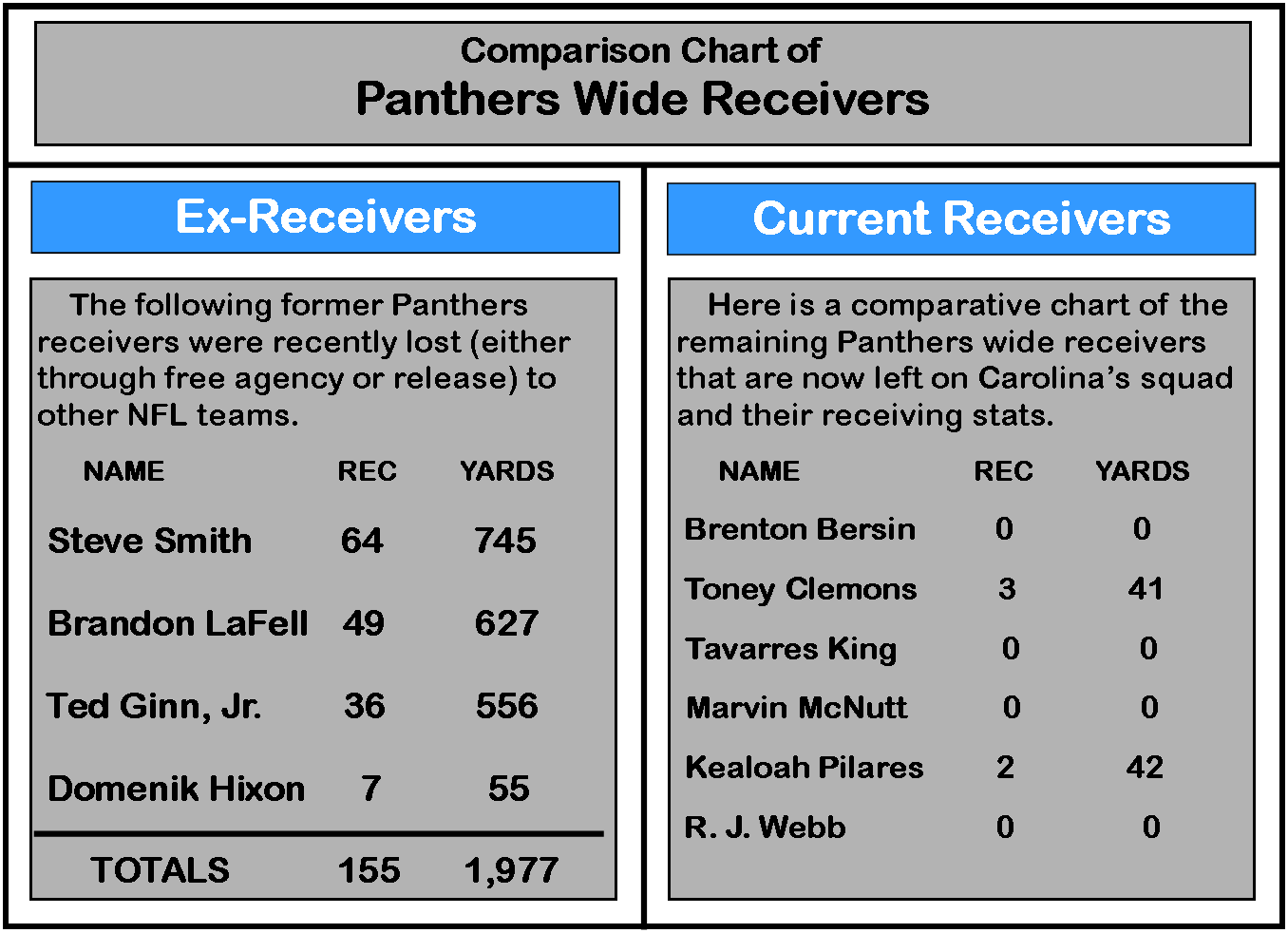 The above Receiver Stat Comparison shows the vast gulf that exists, now that four of the leading Panthers receiver have set sail for other horizons.  The stats on the left, of the ex-Panthers receivers, are stats from the 2013 season.   The stats on the right, of the receivers that are currently left in the Panthers corral, are not season stats, but CAREER stats.  As you can see, it was not necessary to have a TOTAL line at the bottom.  Most kindergarteners can add up those stats in their tiny little heads.

Now, Carolina's big-game QB Cam Newton has very few, if any, targets to throw to, and after the announcement that Newton was undergoing ankle surgery and would be out for 4-5 months, any chance of first securing a group of quality receivers and then Newton having any chance of developing any kind of a rhythm with them is virtually nil and void.

Over the last few days, headlines have surfaced in newspapers, magazines, and on the Internet spelling doom for the Panthers and their offense.  A squad that seemed adequate at times, but not very powerful or able to launch an aerial assault, was often carried along by Carolina's vaunted and Top Five defense.  The Panthers led the NFL in sacks, but were near the bottom in offensive plays over 20 yards.  These recent circumstances only serve to drop the offensive stats to an even lower level of potency.

In addition to these receiver exits, the Panthers also lost G Jordan Gross to retirement, and S Mike Mitchell in free agency to the Pittsburgh Steelers.

Did the Carolina Panthers "drop the ball" in so far as their talented trio of Smith, LaFell and Ginn are concerned ?    This writer thinks so.. what about you ?  When four players, especially at the same position, leave that quickly, it is definitely a sign that something deeper than salary caps is involved.    Who knows ?  All I do know is :  The Panthers have a lot of "catching" up to do.

Posted by GuiTarHeel at 2:06 PM