FALCONS FIZZLE OUT IN OVERTIME

Since the Panthers didn't play this Sunday (our game is on Monday Night Football on National TV), I got a chance to watch some other teams play--- in particular, our rival Atlanta Falcons.  They played the "lowly" (last place) Tampa Bay Bucs.


The Bucs got up to a 20--3 lead, due in large part to multiple Atlanta turnovers, and then the Falcons roared back to tie the game at 20--20 in the closing minute and send the game into overtime.  After a Bucs field goal, the Falcons (under the "new" overtime rules) got a chance to score, but came up short, 23--20. 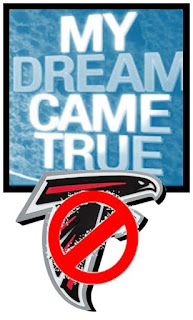 This is what I would've dreamed on happening, but didn't think in a million years that the Falcons, who've been playing so well lately, would lose to the miserable Tampa Bay Bucs.  Guess I could say something lame like, "Well-- this is proof that there's a God"--- but I already knew God exists without this game's outcome.

All I know is--- this is just what the doctor ordered for the Panthers--- just hope with the division lead in our laps, we don't stop playing like we played to get to this place.   I'm hoping that we will even turn it up another notch or two.  As many of the Panthers players and coaches have said, I don't believe we've played our best football yet.   But I'm hoping it will come soon.  We'll need it for the playoffs.

Posted by GuiTarHeel at 5:27 PM